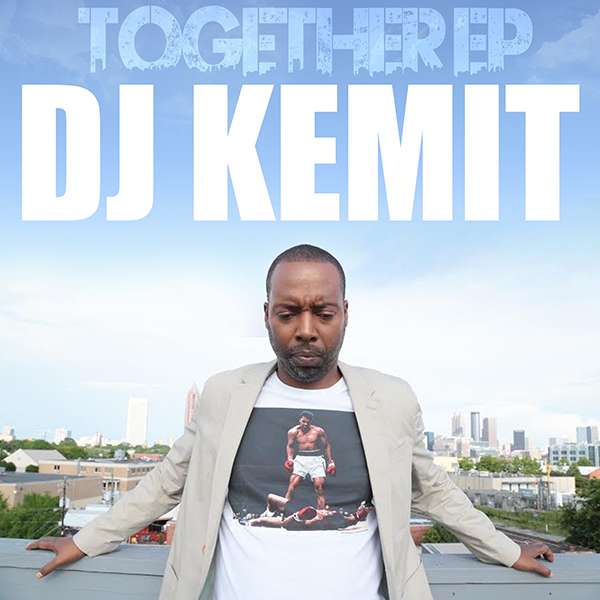 If you’re a music head who likes to go out and cut a rug in Atlanta, chances are you know the name DJ Kemit. The Milwaukee-born, ATL-based turntable legend is responsible for hosting some of the city’s top ongoing parties (e.g., Kickin’ Up Dust, Soul Makossa, Spread Love and, most recently, the ATL Dance Sessions). But his talent doesn’t just end in the club; Kemit has been building a rep over the years as a go-to music producer. In this role, he’s crafted hit songs for local heavyweights like Algebra, Anthony David and Heston. On top of those tracks, in 2012, he released his beat-heavy debut solo album — “Everlasting” — featuring Eric Roberson, N’Dambi and Frank McComb, among other vocalists. And in this brand-spanking-new year, he’s emerged from the studio once again with a collection of tunes — this time in the form of the house music-tinged EP “Together.” The project is dropping in early 2016 via singer/producer Josh Milan’s Honeycomb Music label and co-stars artists such as Terrance Downs, Tasha LaRae and Milan himself. But before “Together” hits the streets, Slo*Mo checked in with Kemit to get the ins and outs on his newest release.

Slo*Mo: So how did this project come together (no pun intended), and how did you link up with Josh?
DJ Kemit: I had this song that I worked on some time ago — never placed it on an album or anything like that. It was one of those tunes I would secretly play [at parties] as an instrumental to get people’s response. But every time I heard it, [in my mind] I would hear Josh Milan’s voice on it. So … I sent him the song [on a Thursday] … and by Monday he hits me up with a text message, saying: “Hey brother we have a problem. … I’m working on my album, and I want this song on there.” And I was like: “What’s the problem?!” Then he said: “Well a lot of guys send me music and it’s already placed.” But I was like: “No man, I just want you on it.” So, that’s where it started back in June [2015]. After that, I kept sending him different tracks and stuff until he just said: “Man, why don’t you just do an EP?” I had already been thinking about how I would do my next project. I think a 12-song record, with people’s attention spans being so short, it’s not the best marketplace for that. But when he said EP, I was like, “Bet!”

How are you planning to get “Together” into the hands of consumers?
The original release date for this EP was the same day as House in the Park [on Labor Day], but we pulled back to maximize the life of the music by releasing it on vinyl. There’s been an uptick in vinyl sales since the 1990s … and no musician right now is supporting themselves off digital sales. So we wanted to maximize the potential of this EP by putting it out on vinyl first and then, four weeks after that, the digital copy will be available on Honeycomb Music.com.

Did you have a particular sound you were going for with your new EP?
I wanted the work on this EP to be the best sounding songs I had done to date. I wanted it to be a project that competed with everything else out there. I wanted it to be a project I was just proud to play. And the talent is just a blessing. So, I definitely checked off all the boxes, as far as making sure I’m satisfied with this project. 2016 is shaping up very well.