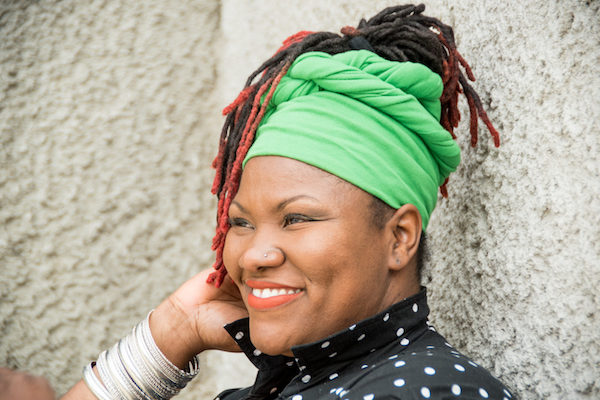 If you catch a glimpse of — or take a listen to — singer Tasha LaRae, there’s a good chance you may recognize her as a member of the famed hip-hop crew Arrested Development or as a vocal contributor to noted producer DJ Kemit’s most recent album, “Together.” But it turns out those collaborations paved the way for a project of LaRae’s very own: her debut solo EP, “Light,” which dropped in March. On the new six-track collection of original material, the Atlanta-based Nebraska native (and the entrepreneur behind the “Racism Sucks” clothing line) presents lyrics that explore a range of human experiences, and music that’s dreamy and ethereal but still danceable. We recently sat down with LaRae to talk the science of going solo and to get a behind-the-scenes look at the making of “Light.”

On making the switch from collaborator to solo artist:
Tasha LaRae: I’ve always wanted to be a solo artist. Well, you know, let me back up: not always. I started out in a gospel girl group called Nu Beginnings. Yeah, we had to be a little fancy and spelled it “n-u” instead of “n-e-w”! That was back home in Nebraska. But when I moved to Georgia with my family, I had to start over by myself. So, I started trying to write songs … and those songs I wrote back then were terrible! But I kept practicing and meeting people. At the same time, I was trying to figure out who I was as a person and as an artist; that isn’t always the same thing, but for me I wanted it to be. I didn’t want to feel like I had to wake up and put on this persona. Because in my mind, I’m gonna forget — and a piece of my personality is gonna shine through. So, I didn’t want that. And being a part of Arrested Development was an amazing blessing because it allowed me to travel, and when we weren’t on tour, I was at home. That gave me the time I needed to figure stuff out. I’m still on that journey.

On her journey to creating “Light”:
I started recording the music for “Light” about two years prior to releasing it. I was working with a four-person songwriting collective called Core [comprised of LaRae, Tru Peterson, Kyle Anthony Williams and Ayana Baker], and we would get together every week on the same day and create “on purpose.” And that’s not always an easy thing to do: making yourself create. But, long story short, we came up with the six songs on the EP collectively, and [all the tracks] talk about a different part of life. I love writing about real-life stuff — something I’ve experienced or something somebody close to me has experienced. I’m excited about the project and proud of it; I just hope other people get the heart behind it and the message behind it.

On what she hopes listeners take away from her new EP:
There’s a song on the EP called “Light,” and what I love about that song is that it’s specifically written to acknowledge people. There are a lot of people who walk around this world, and they literally feel like they’re invisible. They don’t feel like they have any significance, don’t feel important and they don’t know what their purpose is. They feel like there’s something they should be doing but see everyone else doing this awesome stuff … especially on social media. So, I wanted to give voice to that and just say I acknowledge you — I see your light. The other songs on the album are part of that journey, but that specific song encompasses everything. That’s the heart of why I do what I do.

To listen to a full-interview with Tasha LaRae, check out her appearance on Slo*Mo’s Mo Audio podcast.